Michael Reagan is a Vietnam Veteran…a Marine who found his purpose in life drawing portraits. He founded the Fallen Heroes Project, which earned him “The Civilian Service Before Self Honors (2015) Medal from the Medal of Honor Foundation. But it’s his calling to draw the faces of the fallen that propels him, bringing healing to the families, and ultimately, healing to himself.

Michael joined the Marine Corps because he was angry. Angry at the death of a friend named Bill Denhoff who joined the Marines right out of high school after graduation in 1965.  On April 29, 1966, Bill was shot in the chest by a sniper and died on May 4. It occurred only a few days after he arrived. In May, 1966, Michael joined up with 4 of his buddies. Two went to the Army, two went to the Marines, and by 1967, when Michael went to Vietnam, he was still angry. He wanted revenge.

Michael was with Kilo Company 3/4.

“We landed in Vietnam when it was ‘185,000 degrees’ and I suddenly wondered what the heck I was doing there.”

They ended up at Con Thien. He had no concept of what “incoming” really meant, nor did he know how to dig a hole deep enough to be safe. Fortunately,  his Platoon commander, Lt. Pete Wymes got him clued in before something bad happened. He told us he lived in that 6 ft deep hole for a year.

“They called it the ‘Hill of Angels’ for a reason.”

Michael says he was able to tell Pete thank you for saving his life several years later.

While deployed, he began to draw pictures for his buddies, using the torn cartons from sea rations. (Paper didn’t last long in the humidty and mud). He would sell his pictures for cheap and send the money or the pictures home.

Sometimes the artwork was all that came home from Vietnam.

Two of Michael’s friends were killed in a 2 day firefight on 3-28-68 – Peder Armstrong, and Vincent Santaniello. Michael told us that he held Vincent in his arms as he died because he didn’t want him to feel alone.

Vincent’s last words were, “Mike I just want to go home.” Then he closed his eyes and died.  It is Vincent’s face that Michael Reagan stills sees in his mind every day of his life. 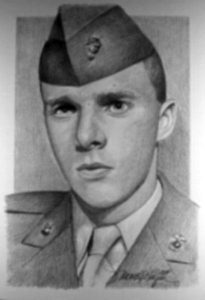 Vincent’s last words: “Mike, I just want to go home.” Then he closed his eyes and died.

Michael left the Corps as a Corporal, an E-4 Squad Leader with 1st Platoon.

By the time Michael returned to the US in 1968, he began spending his time in bars, drawing for free drinks. He told us that the next four years were tough ones, and it was the friends who cared about him that pulled him through, stopping his downward spiral.

After art school, Michael began to realize the drawings were part of a bigger Plan. And as he gave them to families, their lives were changed. He was even able to give his drawing of Vincent Santaniello to the family.

“Ralph Vincent Morales, Vinny’s nephew, represented Vinny’s family and in 2014 came to Edmonds for an event so I could present the portrait of Vinny. Ralph was born 2 years after Vinny died and he was named after him…I told them his last words, that he just wanted to go home. As I gave them the portrait, I said, now ‘his journey begins.'”

Michael’s own journey home from Vietnam began with the portraits of the fallen.

People contact Michael to draw portraits of loved ones lost. He has drawn the faces of famous celebrities, civilians and military young and old. One face that stuck with him was Lilly Garcia, the 4 year old victim of a drive by shooting in Albuquerque, killed while she was in the car with her dad.

He told us that once a Gold Star Mother called him to ask if she could come to lunch with him the next day. She had just received his portrait of her son.

“I suggested we meet at the Claim Jumper’s restaurant in the Alderwood Mall in Lynnwood (Washington). She didn’t know where that was, so I gave her directions. I finally asked where she was and she said, ‘Connecticut.’ It turned out she was flying in to SeaTac from Connecticut with the Brigade Commander’s wife.”

After our lunch, she told me, ‘When I looked into the eyes of my son [in the portrait], I knew you were the last person to see him alive.’

She had come to Seattle to say goodbye to her son.”

The amazing thing about Michael Reagan is that the portraits are provided to the families at no cost for conflicts in the war on terror. They are gifts from his heart to the families of the fallen, healing for both the Gold Star families and the artist.

In the 14 years since the beginning of the Fallen Heroes Project, he has drawn over 5,100 fallen hero portraits. Portraits of the fallen can be requested on the website, as well as donations to the project. His portraits have funded numerous charities across the country. Scroll through the gallery section to see some of the finished products.