Sunday, August 27 dawned relatively normal near the Bears Paw Mountains of Montana. But the ranchers in the area kept a watchful eye on their land, knowing that it could change at a moment’s notice. It did. Families, ranchers, stood together in battle against a raging inferno – it can only be described as the resilience of the Montana Spirit in the midst of tragedy.

Una Ford is a Dialysis Registered Nurse at Northern Montana Hospital. She is 5th generation Montanan, born and raised on a ranch. She and her family live around 35 miles south of Havre, Montana in a 4 mile stretch of ranches that exemplify the idyllic beauty of the Big Sky Country.

Her Mom and Dad run a herd of around 600 head of Commercial cattle. Her brothers, one of whom works part time for the BLM, own a herd of Registered cattle. Una herself owns a herd of Quarter Horses. It’s a family operation that spreads across a 4 mile stretch on the back road she lives on.

Spring in Montana was normal, wet, and brought fresh growth across the state. But the last drop of rain occurred on Memorial Day – since then, it’s been a growing tinderbox. Temperatures soared into the high 90’s, unusual for Montana. The grasses dried out, crackling beneath their feet. As experienced ranchers, they knew that one spark would set off a conflagration.

Una and her family did their best to prepare for the worst, both practically and mentally. They brought their herds as close as possible to the house so they could be defended. Her 30 mares and colts were taken right behind her home just in case.

The East Fork Fire broke out on August 27. By Monday, flames were consuming acreage at an alarming rate. It burned fast and hot. Most of the property in the area is private land.

“By Tuesday, we couldn’t fight it. The terrain is deceiving. You can’t take a vehicle up those hills, they are tough – rocky with timber. There are steep canyons. My two brothers, my parents, and my husband and I – all four of our houses were threatened at the same time.” Una

The area was placed under an evacuation order, but this family stayed to defend their livelihoods, their livestock, against an enemy that has no name, and no creed other than total annihilation of everything in its path.

“My Dad and husband left to fight it and were gone for over 40 hours. Mom and I stayed behind, holding the line. It was intense; hoping you were making the right decisions at the right time. If the wind shifted, you’d have to do something different because it wasn’t safe.” Una

They came from “near and far” to stand with Una and her family: local ranchers, family. They built fire lines, they fought the giant with everything they had. In the end, her livelihood and that of her family was preserved.

Una and her family took a “rescue ride” on Wednesday and Thursday last week and found that the pasture where her Quarter horses had been before the fire had “not one blade of grass left in it.”

Had they not moved the horses…. 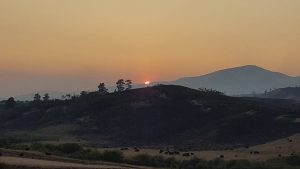 Photo of the blackened area near the cattle – photo credit Una Ford, used by permission

The East Fork Fire is now 80% contained, and is seemingly holding. It has burned 21,518 acres, according to Inciweb.

“We had a pile of losses, but many things to be thankful for. Lots of devastation, but many positive things. No one lost their life. No main structures were burned. People came from near and far to help us. It was amazing to watch.” Una

Helping one another, seeing the positive in the midst of devastation, that’s the Montana Spirit. Our best wishes to Una and all the families and ranchers like her who exemplify the very best of America.

This article may also be viewed here.